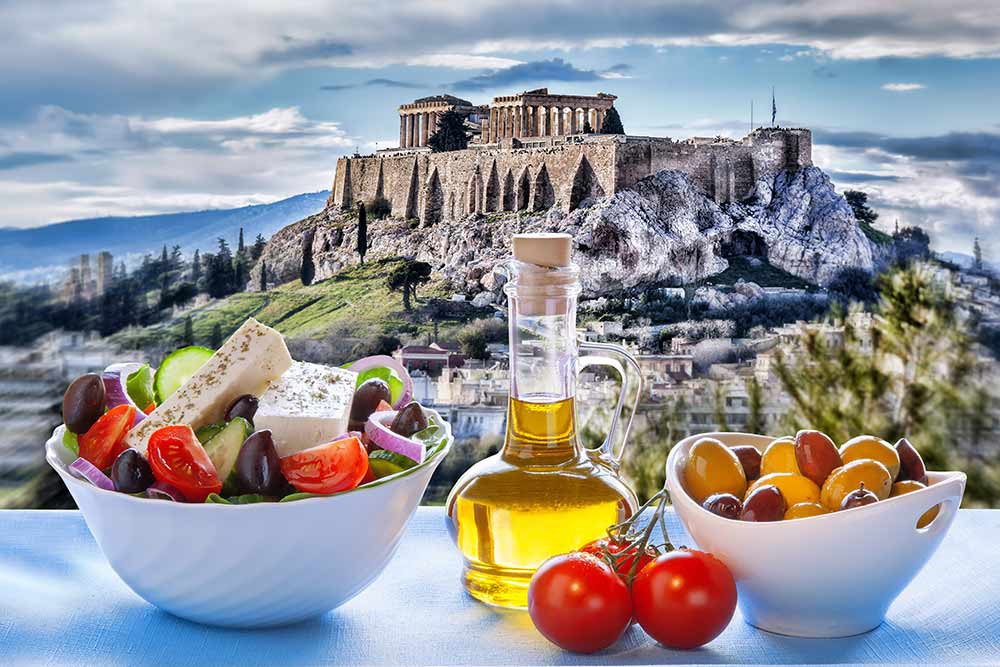 From one of the most ancient civilizations on earth comes simply prepared food that uses the best of what’s in season. Adding a little magic in the form of clever flavorings.  Greece’s culinary tradition dates back hundreds of years and has evolved over time to absorb many diverse influences.

Many well-known Greek dishes are in fact part of the larger tradition of the food of the Ottoman Empire.  Classic dishes include moussaka, börek and tzatziki having Arabic, Persian and Turkish roots. Other examples of  dishes that can be traced back to ancient Greece include lentil soup, fasolada and retsina.

Greek cuisine uses some flavorings more often than other Mediterranean cuisines do. Such as oregano, mint, garlic, onion, dill and bay laurel leaves. Other common herbs and spices include basil, thyme and fennel seed. Parsley is also used as a garnish on some dishes. Many Greek recipes, especially in the northern parts of the country, use “sweet” spices in combination with meat, for example cinnamon, whole spice and cloves in stews.

The most characteristic and ancient element of Greek cuisine is olive oil, which is used in most dishes. It is produced from the olive trees prominent throughout the region, and adds to the distinctive taste of Greek food. The olives themselves are also widely eaten.

Greek food is simple, colorful and incredibly nutritious.  In addition Greek food has a reputation for being heart healthy. This is because it uses olive oil, fish, lean meats, vegetables, herbs and grain. One example is the classic moussaka – a hearty dish made of layers of lamb and eggplant, smothered in béchamel sauce and cheese.

In all honesty, Greek Cuisine is so varied in its nature that it can very hard to describe and something best experienced firsthand!