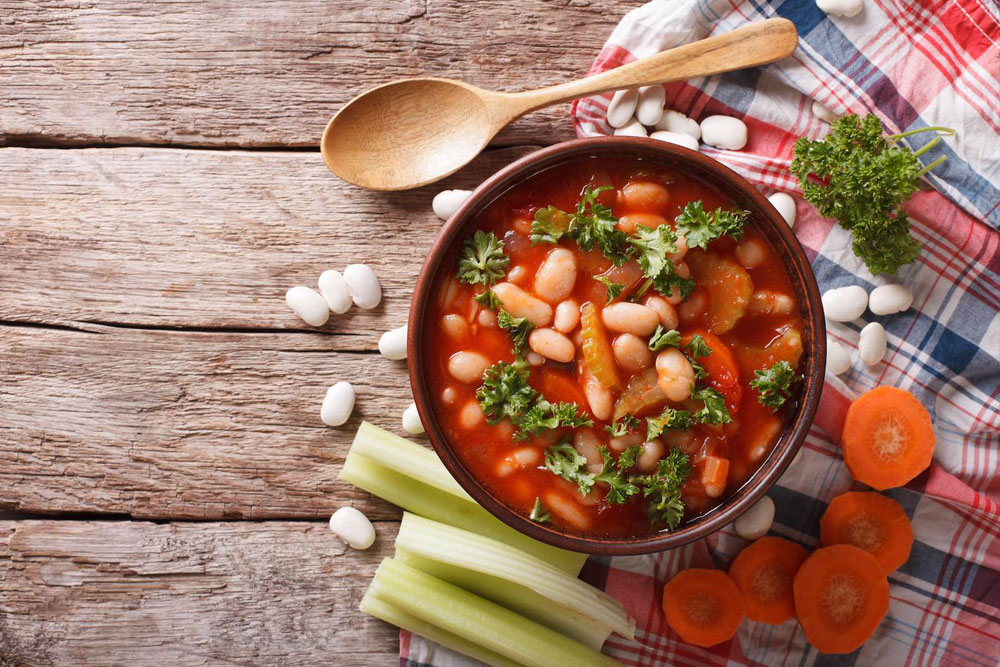 What would the Greek-Mediterranean cooking be without the plethora of healthy, delicious dishes based on Greek beans and legumes? The most ancient legumes are the lentil, chick pea, fava bean, and vetch, or split pea. All of which are still widely consumed in soups, stews and baked casseroles all over Greece. Greeks traditionally eat beans at least once a week. Famed Greek giant beans (“gigantes”) and white beans of varying sizes grow well in the fertile wet soil of Greece’s rainy North.

In Greece, despite its hard times, war and occupation, people considered themselves lucky to have a bowl of watery bean broth, fasolada. Α rich in carrots, celery, onions, tomato and virgin olive oil. Fasolada is often cited as the country’s most emblematic national dish.

Salads are ever-popular tavern staples year-round. Such as black-eyed peas, and dips like fava, made with split yellow peas.

Following is a short list and description of some of the most popular beans and pulses on the Greek table:

Although Greeks consume many different kinds of beans and pulses, the oldest are no doubt the broad bean, the chick pea and the lentil, which have been savored all over the Mediterranean since time immemorial. Given the fact that pulses were the stable food of the poor and rarely formed part of lavish banquets. Legumes are said to be used throughout antiquity and constitute an essential dietary supplement, since they are an important source of protein. They serve as nutritious food for men and important source during famine. Some varieties of legumes were used medicinally in the Roman period. Legumes have the ability to fix nitrogen into usable form and makes it useful in the fields and in health.

You can always find these healthy hearty dishes in our restaurant from Monday to Friday as Special Dishes. You can even order them online from Deliveroo, Uber and Just Eat.